“For the dead and the living, we must bear witness.” - Elie Wiesel 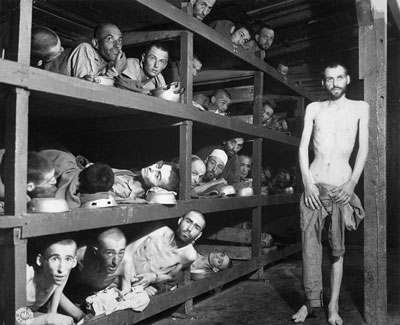 The denial of history

Near the end of , as Nazi concentration and death camps were liberated by the allied forces, nearby townspeople at a number of sites were forced to march through the . Some of the locals were quoted as saying that they were not aware that such a thing was happening in their homeland and, very nearly, in their own backyards.

It would be cruelly ironic to collectively pass guilt on all the German people for . The belief in group guilt and the infliction of collective punishment are both . The Jews were wrongly and viciously targeted because of a Nazi belief in the collective guilt of all Jews for an atrocity millennia earlier.

In the end we do not know what responsibility any individual townsperson had in the incarceration of thousands of lives and the incineration of many thousands more. As a group, however, they did have a singular responsibility in the aftermath. Having laid eyes on , the most important task of the townspeople was to bear witness, to observe and report what had happened to . As General Eisenhower said after visiting one of the death camps, “Get it all on record now, get the films, get the witnesses, because 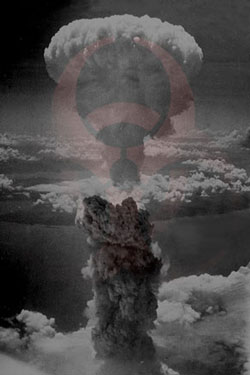 A history of denial

August 6 marks the 75th anniversary of the dropping of the first atomic bomb. On that date in 1945, within a matter of seconds, . That atrocity was followed just three days later, on August 9, by the detonation of a second atomic bomb over the city of Nagasaki. A mere four months after the atrocities of the Nazis had been revealed to the world the United States had committed its own terrible acts of collective punishment.

Throughout the war the United States government was quick to publicize German and Japanese atrocities but worked overtime to hide its own barbarism. Shortly after assuming the role of Viceroy of Japan, General McAuthor imposed total censorship on journalists wishing to report the aftermath of the atomic bombs, either confiscating or destroying nearly all photographic evidence taken at the two sites. We now know that, by a single act, , including 20,000 conscripted Koreans forced to work for the Japanese. In addition to the tens of thousands that died instantly, many tens of thousands more died slow agonizing deaths from radiation poisoning and other injuries. Ironically, the all-Christian crew of the second bomber managed to do what various Japanese governments had been unable to do for centuries: by dropping the bomb on Nagasaki, they annihilated the largest Christian community in Japan, a community of thousands that had been forced to go underground in the 1600’s and survived in secret for over two centuries before the ban on Christianity was lifted in 1873.

While we have long been told that the use of nuclear weapons was necessary to end the war, a number of high ranking officers, including General Eisenhower and Admirals Halsey and Leahy, thought that they were not needed. Eisenhower, the supreme commander of allied forces in Europe, had in fact advised the Truman administration against using the new weapon.

Unfortunately, here in the United States we continue to live under a veil of ignorance, both with regard to World War II and to the seven or more current wars that the U.S. is either leading or participating in. In this hyper-connected world that provides billions with the access to instant information, there seems to be little knowledge in this country of the damage and suffering caused by decades of war and political and economic interference by the U.S. government.

In 1991, after a massive 42 day bombing campaign that resulted in the death of tens of thousands of Iraqi civilians, in part due to the targeting of water treatment plants, George H.W. Bush proudly proclaimed that the U.S. had . In doing so Bush tortured the English language to mock while deliberately . The following President, Bill Clinton, added to the misery in the Middle East by enforcing brutal economic sanctions against the Iraqi people, sanctions that the United Nations estimated .

The cost of ignorance

Ignorance is not bliss. . In addition to recognizing the human and monetary costs of these wars, we who are opposed to war also understand the principle of blowback, a term coined by the C.I.A. to describe the unintended consequences of covert actions by the U.S. government in other countries. Having opened Pandora's Box in the 1850's by forcing open Japanese ports through the threat of naval bombardment, . What will the ultimate consequences be for U.S. military involvement in Afghanistan, Iraq, Pakistan, Somalia, Libya, Syria and Yemen and other countries not yet reported?

Additional discussion of the futility and ultimate costs of war can be found in the chapter Dead Ends in the Beginner's Guide to Peace.

Buchenwald survivors, including Elie Wiesel, quoted above. Instead of piles of bodies, I choose this picture of the survivors of the Buchenwald death camp to illustrate not just the horrors of the State but also the dignity and strength of the human spirit. Public domain image downloaded from Wikimedia Commons.

Is the price worth it? Screen capture of Iraqi victims of U.S. economic sanctions, from Leslie Stahl interview of Secretary of State Madeleine Albright on the 60 Minutes news program, May 12, 1996. The dialog is as follows - Lesley Stahl on U.S. sanctions against Iraq: "We have heard that a half million children have died. I mean, that’s more children than died in Hiroshima. And, you know, is the price worth it?" Secretary of State Madeleine Albright: "I think this is a very hard choice, but the price–we think the price is worth it."