"Justifying conscription to promote the cause of liberty is one of the most bizarre notions ever conceived by man! Forced servitude, with the risk of death and serious injury as a price to live free, makes no sense." - Ron Paul

"Be the change that you want to see in the world." - Mohandas Gandhi

Beginner's Guide to Peace - Getting Your Bearings

"..there were no thoughts in Ivan's mind but something very vague. He felt that he had lost his bearings." - Fyodor Dostoyevsky, The Brothers Karamazov

A compass is a tool that is both consistent and elegant in its simplicity. It does not point the direction to travel but, like , can provide a steady reference to use as a guide.

The , or , is a similar kind of tool. It is a moral compass providing a logical and ethical standard for living a free and peaceful life. The NAP does not dictate which specific path to take nor does it provide a detailed itinerary. Every individual has their own journey to travel and there are many roads available. Used intelligently, the NAP can serve as a steady reference to guide each of us on a lifetime journey of peace and liberation.

The , the provides for many of our . Rules follow naturally from the NAP. By logical extension, the NAP also prohibits most forms of taxation, military drafts and other forms of involuntary servitude, and nearly all forms of government as currently practiced.

The is not pacifism. It does not prohibit the use of reciprocal force in the act of defending one’s person or property against aggression. Equally important, the NAP does not validate the use of violence in personal defense if bystanders are likely to be harmed.

The free and voluntary exchange of goods, services and ideas is a natural and desirable outcome of the . This is in sharp contrast to most forms of government, incorrectly hailed as protectors of individual rights, which instead violate humanity at multiple levels. Governments that use unwarranted force and the threat of violence against people and their property are neither necessary nor the proper foundation of a free and civilized society. 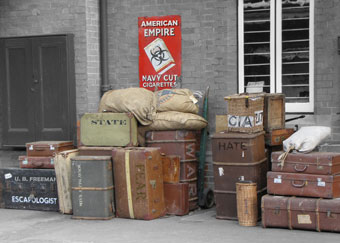 For most of us, departing on a journey requires leaving some things behind. Beginning travelers often find this difficult and burden themselves with excess baggage. Experienced travelers, knowing what is essential, travel light.

For many, the journey to understand and fully apply the will require the abandonment of significant intellectual baggage. For some this will mean leaving behind the mythology and worship of the State. For others it will mean casting aside the use of to achieve social goals. For still others it will mean .

Where will our journey of liberation on the path of peace lead us? The essence of travel is to challenge preconceived notions and to engage with people, in places and cultures, that can seem particularly foreign at first. As we fully explore the implications of the and its many applications, we may well discover that we are not so very different and that we have much in common with fellow travelers, both past and present. It is hoped that the end result will be a flourishing of communities that fully embrace freedom and that forever forsake the initiation of violence.

- The Non-Aggression Principle (NAP) is a reference point useful as a moral compass. It is not a fixed map or list of directions to a specific destination.

- The State, with its involuntary taxations and wars of aggression, is a notorious violator of the NAP.

- Voluntary exchanges between individuals and groups are the embodiment of the NAP.

^ Cooperation vs Coercion: "Taxation is the price we pay for failing to build a civilized society. The higher the tax level, the greater the failure. A centrally planned totalitarian state represents a complete defeat for the civilized world, while a totally voluntary society represents its ultimate success." - Mark Skousen.