A Matter of Perpective

“Attachment constrains our vision so that we are not able to see things from a wider perspective.” - Dalai Lama 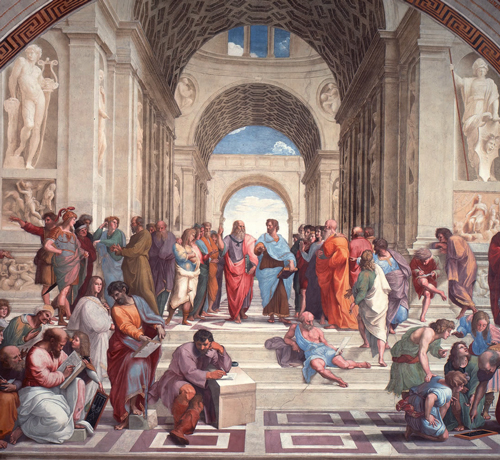 . Largely absent in ancient art where important figures were portrayed larger in size and with little depth, that began with the ancient and were refined by the blossomed in . Instead of depicting flat and oddly proportioned bodies, as painter magicians combined the ingredients of vanishing points, foreshortening and sfumato, .

One beautiful example is Raphael's . It not only demonstrates a mastery of depth and perspective, it also captures the vital energy of philosophical discourse that had occurred many centuries earlier in ancient Greece. Epicureans and stoics, Platonists and atomists, cynics and skeptics enthusiastically discussed and debated .

In contrast to that time, . Without depth or dimension, of right versus left prevails, of what's up and what's down, or where we came from, or where we are going.

overly focuses on the of those who seek power, making them look larger than life and . They overly , cheering on the contest with little questioning of the destructive nature of the game itself.

The people in power, in turn, seem incapable of seeing beyond a single dimension. Lacking any depth of understanding regarding , they instead fixate on military and other coercive "solutions", inserting aggression into the normally consensual relationships of commerce and community. They have no real sense of beauty, principle or moral virtue, seeking only victory .

Finally there are the citizens. Often misinformed but nonetheless willing participants in the political process, they flail back and forth within the narrow confines of left and right, seemingly distracted by the smallest of issues and unable to see the bigger picture. Blocked in their desire for peace and prosperity by forces they cannot see, they fixate on small obstacles but perceive them as insurmountable barriers. Lacking perspective, they are unable to see alternate paths forward. 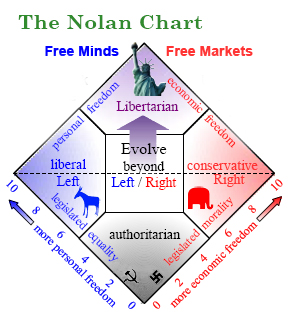 As long as people are locked into the false dichotomy of left and right, they will forever be unable to see the fuller, richer reality. by even one dimension, however, we can become aware of details previously hidden. By distinguishing between , for example, we can map out in which to discuss politics. Opponents that once seemed radically different, such as the and the , are revealed to be closely related when viewed from a two dimensional perspective. Instead of being viewed as extremes sides of a left-right dichotomy, we can more easily see the similarities of these that severely restricted both personal and economic freedom, each destroying the lives of millions.