A ritualized killing that is still recalled after many centuries, it was a , a man who dared to question the morality and authorities of his time. This man certainly committed no crime that any compassionate person today would put him to death for. His death was to demonstrate the power of the State. 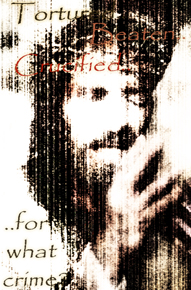 It was targeted to anyone who dare challenge the State.

Has much changed in the past two millennia? It certainly seems today that . What has undeniably changed is that . The new Empire encircles the globe with hundreds of army, air and naval bases, commanding an arsenal of thousands of nuclear warheads powerful enough to remove any trace that the Romans ever existed.

Yet, as powerful as it is, the Empire is cracking. Is there any place safe from the beast as it flounders about, seemingly at random, blind to the consequences of its own reckless behavior? Are our own moral compasses strong enough to guide us through this storm?

Reporters of war crimes are reviled, jailed and even murdered while war criminals roam free, spreading fear and lies in the media and halls of power. How did things get so distorted? More importantly, how do we find the courage and strength to break through the walls of deceit? More on this topic can be found in the chapter Dead Ends in our free online book Beginner's Guide to Peace.