Democracy must be a delicate thing to be so easily damaged by the mere possibly of fake news from foreigners. The mainstream media is all in a tither over the possibility of Russian interference in U.S. elections. As usual I suspect they are probably missing the real story. Let’s take a look for ourselves at some of the electronic ads “the Russians” reportedly paid to promote during the last election cycle. 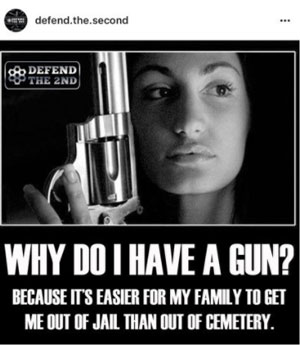 Other than a small grammatical error, what is wrong with this ad? It is a fact, after all, that guns are used as deterrents from crime tens of thousands of times each year in the United States alone. And it is no secret that many in the Democratic party are quite open about their desire to increase gun control. Considering these facts, I think it is clear that the people attracted to this ad would not likely have been supporters of Hilary Clinton.

By the way, I think I should start putting quotes around the “Democratic” party brand to emphasize the irony of the name, especially considering how the DNC short circuited the democratic process internally to bend the election towards HRC in the last primary.

Is this ad considered dangerous because it is factually inaccurate? 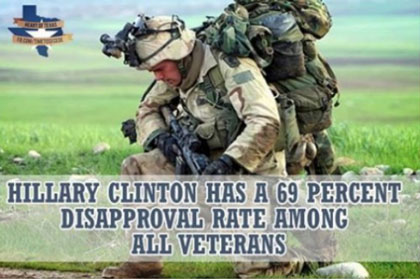 I find it hard to believe that Hilary Rodham Clinton only had a 69% disapproval rating among veterans during the last election cycle. I would have thought it was much higher than that, considering how she contributed heavily towards getting U.S. troops involved in new wars, this time with the Libyan and Syrian peoples. HRC also had a bad reputation among veterans for minimizing issues being reported by injured vets and their families at US VA hospitals. I doubt the people who identified with this ad would need much reminding to not vote for Hillary.

With regards to the picture in the ad, it seems odd that Social Justice Warriors, among HRC’s biggest supporters, seem more concerned with perceived social slights to a rotating selection of victim groups within the U.S. than with the wholesale assault and destruction of families, tribes and entire nations across Asia and Africa caused by a militarized U.S. foreign policy, one that HRC seemed quite comfortable with.

Was Bernie Sander’s misquoted? If not, what is the “problem” with this ad?

There is certainly plenty of published evidence of “pay to play” deals and the use of Clinton Foundation funds to help pay for Chelsea Clinton’s wedding.

Perhaps this ad was produced to remind Bernie Sanders supporters of what was done to their candidate by the HRC dominated “Democratic” Party during the 2016 primaries.

Were these and other ads enough to tip the balance towards Trump? Was the will of the people denied by interference from the Russians? Did any of this have any measurable effect at all on the last U.S. election?

The Russians certainly didn’t interfere with my "democratic rights". I was appalled by both major candidates, and finding no anti-war candidates among the other parties who were also committed to economic and social freedom, I decided to once again stay home on election day.