"Words have no power to impress the mind without the exquisite horror of their reality." - Edgar Allan Poe 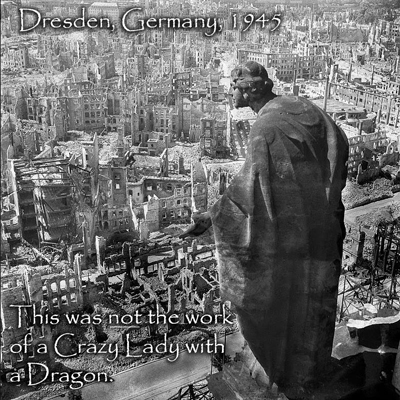 The penultimate episode of the Game of Thrones left millions of viewers horrified. They witnessed the senseless and utter destruction of a beautiful city occupied by hundreds of thousands of civilians. The Queen, it seems, had lost her mind in .

As much of any fantasy movie or series can, the Game of Thrones revealed a historic reality often ignored. That reality is that civilians are not just the "collateral damage" of brutal wars but are very often the targets.

The picture of Dresden shows what was left of the German city after a massive firebombing by Allied forces. In a series of four raids, from February 13 to the 15th, 1945, the "good guys" carpeted the city with bombs and incendiary devices. They did so with the intent of utterly destroying the city, and its largely civilian population, by fire and suffocation. After waves of bombing the city was engulfed in of the bomb shelters and basements sheltering people hoping to survive the fire. The end result was . An even more horrific conflagration was inflicted on the inhabitants of Tokyo less than a month later, .

The targeting of civilians did not end with but has continued into the modern day. The turn of this century was marked by the U.S. and "allied" bombing of water treatment plants in Iraq and militarily enforced blockades of chlorine and other materials needed for clean water in that country. Ultimately these acts by the Bush-Clinton team led to the deaths of hundreds of thousands of civilians.

The reality is, as insane as the actions of the Dragon Queen were, the fantasy world of the Game of Thrones cannot compete with the real world, a world where criminals such as Dick Cheney, George W. Bush, and Bill and Hillary Clinton walk free with little or any hint that they might someday pay for the war and other crimes they have committed.

A more detailed look at how the war makers deceive us can be found in the chapter Dead Ends.