Dr. Paul and the Cure for War

"When one gets in bed with government, one must expect the diseases it spreads." - Dr. Ron Paul 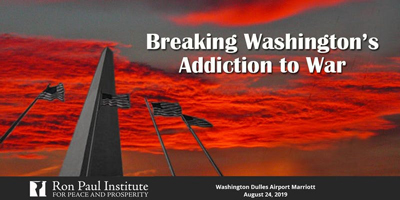 On August 24, the Ron Paul Institute held its fourth annual Peace and Prosperity conference in Dulles, VA. The headline topic was "Washington's Addiction to War". In addition to Dr. Paul, there were a number of other interesting and passionate speakers at the conference. What follows are some of the highlights.

Welcoming the attendees was Daniel McAdams, Executive Director of the Ron Paul Institute and co-host of the Liberty Report podcast presented Monday through Friday with Dr. Paul. Opening with the headline topic, Mr. McAdams emphasized the importance of repairing language and calling things by there proper names. He described how economic sanctions are actually just another type of warfare, one that is particularly insidious in that it impacts civilians first and can be as deadly as any shooting war. Contrasting the declining national infrastructure he experienced on his drive from Texas with the rapid growth of office buildings around DC, McAdams stressed the importance of following the money. As companies that benefit from the largess of the Military Industrial Complex grow rich, the rest of America is being hollowed out.

Following Mr. McAdams was Congressman John Duncan, one of just six Republicans that voted against the invasion of Iraq in 2003. Representative Duncan described how unpopular that vote was in his conservative Congressional district. It was delightful to hear that the vote eventually became one of his most popular votes, illustrating the importance of courage and patience in the face of strong opposition.

Next up was David Stockman, former Congressman, Manager of the OMB and, in 1967, antiwar protester. Mr. Stockman called imperial Washington "the greatest threat to world peace". A numbers person, he stated that the actual annual cost of the nation's military apparatus was $1.1 trillion, a number that far exceeds the spending of the next eight countries combined. Just the $80 billion so called "intel" budget was 25% more then Russia's total spending on defense.

Using NATO as an example of military waste, Mr. Stockman recalled the promise President Reagan made to Russian leader Mikhail Gorbachev in 1989. In trade for Russian support of the reunification of Germany, the United States promised that NATO would not expand east. What has happened instead is that NATO has expanded to the very borders of Russia with the incorporation of former Soviet Republics such as Latvia, Lithuania and Estonia. This has only served to heighten tensions with Russia while extending the commitments of NATA, and by extension, the US taxpayer, with ever diminishing returns.

Nathan Goodman talked about "The Economic Costs of US Empire", highlighting the $5.9 trillion dollars that the US taxpayer has been saddled with for 21st century wars such as Iraq and Afghanistan. Mr. Goodman described how government spending on things such as war lacked a feedback mechanism like that which occurs in the free market through pricing. Instead, we get endless waste and destruction with no one being held culpable. As Mr. Goodman put it, "with great power comes massively reduced accountability."

One of the most powerful presentations of the day for me was that made by journalist Rick Sanchez. Having worked for NBC, MSNBC and CNN, Mr. Sanchez explained that he now has much more freedom as a journalist working for RT America than he ever did at the other networks. Mr. Sanchez suggested this was because of the corporate capture of the networks by defense contractors like Raytheon and companies like Monsanto that seek to control what is reported.

Mr. Sanchez stated that what was important was "what they don't tell you". Sanchez pointed out the hypocrisy of his former employers in their inordinate focus on the now discredited narrative of Russian interference in the 2018 elections while ignoring more than a century of US interference in the elections and operations of countries from Latin America to Asia. US manufactured coups, such as that which occurred in Honduras in 2009, are little if ever mentioned while days and weeks of news cycles are devoted to determining whether a hundred thousand dollars of ads by some Russians may have tipped an election.

Former CIA analyst Larry C. Johnson laid out the case of a deep state coup against Donald Trump in the form of Russiagate, outlining the evidence and describing the corruption within the FBI. Mr. Johnson thoroughly deflated the narrative of the Russian hacking of the DNC servers in 2018, outlining the forensic evidence indicating that the leak to WikiLeaks was an inside job.

Col. Douglas Macgregor presented his proposal for "National Security Without Constant Conflict", stating the need to get out of Afghanistan and to sign a peace treaty with North Korea. As other speakers had stated, failure was being repeatedly rewarded. Col. Macgregor closed by stating "We need to stop being an engine of destruction and get back to being an engine of prosperity."

The great Lew Rockwell, one of my personal heroes, gave a moving talk about his dear late friend, Murray Rothbard, and Murray's belief that the single most important issue for libertarians was the war and peace issue.

Mr. Rockwell outlined the ways that war destroys a society: First, it deforms us morally. War makes us think that people are disposable. Second, it deforms the economy, killing the freedom of curiosity and the freedom of knowledge needed for an economy to prosper. Third, war distorts reality itself. It does this by wrapping itself in images and symbols of home and family, deluding people and preventing them from seeing its true nature. Mr. Rockwell closed with the straightforward remark "Peace builds, war destroys".

As usual, the Good Doctor, Dr. Ron Paul, closed the conference with his prescription for peace. Dr. Paul captured the audience's attention with his charismatic and passionate support for the causes of peace and liberty. Dr. Paul described how governments try to divide us into groups but that liberty frees us to be able to work together to find solutions. Noting the destructive outcomes of government interference overseas, Dr. Paul stated that "nonintervention is the answer".

After regaling the audience with a number of stories about his time in Congress, Dr. Paul wound down his talk by saying that the answer really came down to following the . Dr. Paul concluded the conference with his standard reply to those who ask "What should I do to promote Liberty and Peace?" answering "Do whatever you want, and have fun too!"